I was sitting around the house thinking of some of the things back home in Texas that I haven't seen in coon's age. I haven't been home in over six years, so I'm sure I'm missing plenty. But I was thinking of things from my childhood. Things like those pink Cadillacs that the Mary Kay representatives used to drive. I guess they still drive 'em, even though Ms. Ash died almost a decade ago. Seeing those flamingos on wheels was always a treat for me as a little boy. Why? I don't know, other than the Mary Kay people, I reckon there weren't too many pink Caddies roaming the streets of Dallas-Fort Worth in the early to mid-1960's.

Mary Kay Ash was the brains behind the Mary Kay cosmetics empire. Ms. Ash worked in direct sales for year before retiring for a whole month in 1963. She took her last $5000 and created her company as a means for women to get into the male-dominated business world. She must have done something right. As of 2008, Mary Kay employed over 1.7 million sales consultants around the world in 37 countries and sales of over $2.2 billion. Ms. Ash's Wikipedia entry says, "Both during her life and posthumously, Ash received numerous honors


from business groups, including the Horatio Alger Award. Ash was inducted into the Junior Achievement U.S. Business Hall of Fame in 1996. A long-time fundraiser for charities, she founded the Mary Kay Ash Charitable Foundation
to raise money to combat domestic violence and cancers affecting women. Ash served as Mary Kay Cosmetics' chairman until 1987, when she was named Chairman Emeritus. She remained active in the company until suffering a stroke in 1996. Richard Rogers was named CEO of Mary Kay Inc. in 2001. At the time of Ash's death, Mary Kay Cosmetics had over 800,000 representatives in 37 countries, with total annual sales over $2 billion at retail.  Mary Kay herself was honored as leading female entrepreneur in American history."

To me, the thing that was the cornerstone of her business empire was her simple philosophy of God first, family second and career third." A perfect example of the K.I.S.S. Theory, Keep It Simple Stupid. Applied liberally, the K.I.S.S. Theory is a brilliant policy for any business person. But, no one put to better use than a lovely woman and a kind soul, Mary Kay Ash.
Posted by Unknown at 1/21/2011 03:05:00 PM No comments: Links to this post 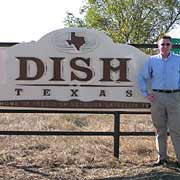 One of the most popular and fun topics to write about on Three States Plus One is odd or funny town names. I looked through the blog archives, and it has been since October 22, 2010 that we did such a post. The topic had frankly skipped my mind until yesterday when I was checking out some "hubs" (web pages) on a site called HubPages. I ran across HubPages about nine months ago when I read about it on another site named MakeUseOf. Anyway, I joined HubPages with the intent of doing some writing and blogging within that community. I started posting on HubPages about a week ago, and my articles have gotten some nice reviews. Plus, the other "hubbers" (those who write and post on the site) seems to be a good group of people with more than their fair share of smarts because they give my stuff good reviews.  :)  But seriously folks....While perusing the works of some of the other hubbers, I ran across a writer with the handle of KCC Big Country who had done a post on HubPages similar to the ones I did on this blog here, here, here and here.
A couple of Texas town names that KCC Big Country found inclded Alligator located in Bell County and Bee House in Coryell County.

KCC Big Country put a lot more effort into her post than I did mine and she came up with some bee-yutes. Since she did all the leg work, I wan tot send her some page hits for a job well done. The particular page to which I am referring is located here. There are some classic small town names. While you're over at HubPages, look for my contributions by searching for "FishFearMe". One more thing, post a comment on KCC Big Country's "hub" and let her know that you found out about it here.
Posted by Unknown at 1/21/2011 05:52:00 AM 2 comments: Links to this post