Colorado Chronicles : The Bizzard of 2003

When living in the mountains west of Denver, I saw some pretty bad snowstorms, the worst of which dropped 54 inches of snow on my front yard. That one's a piker compared to the big blast in 2003. The Blizzard of 2003 stands as one of the worst snowstorms in Colorado History. For instance, my good friend Doreen Bob and her family were living in a town called Rollinsville (elev. about 8200 ft.) near where I lived at one time. They got eighty-seven, that's 87(!) inches of snow from this storm. She showed me some pictures of the aftermath and cars were completely buried in snow. Street signs disappeared under snow. Houses (including my Mom's a few miles away) had snow blocking all ground level doorways. It took my Step Dad three days to clear a path from their front door to the street. For the area around Rollinsville-Nederland-Central City and Metro Denver, it took over 1000 workers one week to clear the roads. Amazing. Denver International Airport was shut down as were most business due to the enormous amount of snow. So the next time you think you've got it bad, think of those folks in Colorado held hostage by Jack Frost. Then, you'll realize whatever weather-related inconveniences that got you down ain't so bad.
Got a weather story to pass on? Share it with us in the comments.
Posted by Unknown at 7/13/2010 03:55:00 PM No comments: Links to this post

Email ThisBlogThis!Share to TwitterShare to FacebookShare to Pinterest
Labels: Blizzard, Blizzard of 2003, Colorado 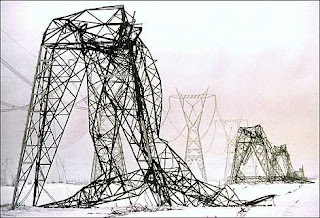 Mother Nature can be a cruel mistress when she sees fit to. The Northeast US and Southeast Canada found out firsthand what a bitch she can be, starting on January 5, 1998. The setup from Wikipedia : "A series of surface low pressure systems passed in this atmospheric circulation between January 5 and January 10, 1998. For more than 80 hours, steady freezing rain and drizzle fell over an area of several thousand square miles of Eastern Ontario, including Ottawa and Kingston, an extensive area in southern Quebec, northern New York, and northern New England (including parts of Vermont, New Hampshire and Maine)." My wife, Heather, had a few days off work at the time, and decided to drive from her home is Eastport to Sidney (just north of Augusta) to visit her aunt and uncle. Soon after her arrival, the freezing rain started and didn't stop for  more than three days. Heather writes, "Two things stick out in my mind when I think of the Ice storm in 98.  The first one happened when I was visiting family in central Maine.  I woke up hearing the news on the radio that Sonny Bono died in that skiing accident.  Drowning out the radio however was the snapping, and popping of the trees in my family's backyard.  You could hear that snapping,crackling, and popping of the trees all day and into the night.  Another thing that sticks out in my mind was when I was going home to my mother's house who lives in downeast Maine.  They didnt have their power back yet and my mother took everything from her fridge and freezer and put it in the backyard in the snow and on a table they put outside.  Talk about your Yankee ingenuity." On top of that, over 700,000 of Maine's 1.2 people were without electricity, some for months including Heather's aunt and uncle. A more detailed account of the Great Ice Storm of 1998 can be found here.
Posted by Unknown at 7/13/2010 01:19:00 PM 1 comment: Links to this post

I moved to Wichita Falls in November, 1979 to begin what would be a fifteen year odyssey into the world of radio at the "King of the Country", KLUR, 99.9 FM. At this time, the city was still recovering from the deadly tornado of April 10, 1979, Terrible Tuesday. The apartment I moved into was just re-built as the result of damage from the twister. Here's an image of what the complex looked like just after the storm. In a nearby city park, there were hundreds of Government trailer houses lined up side by side for what seemed like forever, inhabited by Wichitans whose homes had been destroyed by the mile wide tornado. It was a very humbling sight, to say the least. A little ways down the road to the east was Sikes Senter Mall, where many of the forty-five people who were killed in the storm were making a routine shopping trip, never suspecting how their lives would be changed forever. WARNING: the following story is NOT for the faint of heart : I became friends with a guy named Paul who was an EMT and  responded to the unending calls for help after tornado. He told me of searching for survivors/victims in the rubble when he came upon a woman's hand pertruding from under the remains of a house. He moved the debris away to get to the woman, but there was no woman. Only a hand with a wedding ring on it. Paul's eyes welled with tears. END WARNING. I was told by other rescue personnel of straws from brooms, driven by the force of the storm's winds, embedded in telephone poles. Get this...one home was completely torn off its foundation., but on the concrete slab was a kitchen table with a checkbook and the month's bills laid out like someone had been sitting there within the last few minutes paying those bills. I am eyewitness to a community coming together in tragedy, pulling itself up by the bootstraps and declaring, "Mother Nature, you will not defeat us!". True Texans, those Wichitans. The storm of Terrible Tuesday, sadly will not be last to hit Texoma Town, but the people of Wichita Falls have put Ma Nature on notice that they will bounce back no matter what hand they are dealt. True Texans, indeed.
Posted by Unknown at 7/13/2010 09:50:00 AM No comments: Links to this post