The History of the Easter Egg 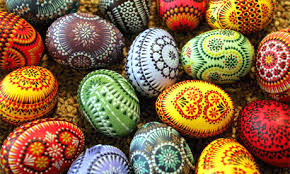 I know. I know. I know. I was supposed to take the weekend off from blogging, but my wife is watching some TV shows on the DVR and I figured "what the heck?". So here I am. Luck you, huh?

Here it is Easter Saturday and other than the obvious religious aspects of the day, what is one of the things most associated with Easter? You got it! The humble Easter egg. Using a little Google Fu, I looked up the History of the Easter Egg. You may be surprised at what you learn.

The Holiday Spot website has the scoop, but first here's a preview:

"Easter eggs are specially decorated eggs given out to celebrate the Easter holiday or springtime.

It is the influence of the traditional spring rites that made Easter so egg-special. And myths coming down to us from an incredibly distant past have shown man's relationship with the egg to be very deep seated one. This is caught in old Latin proverb: "Omne vivum ex ovo". This means "all life comes from an egg". Not just the Latin saying, eggs are just laid well over all corners of the world. From ancient India to Polynesia, from Iran, Greece, and Phonecia to Latvia, Estonia, and Finland, from Central America to the west coast of South America, there are reports of myths of the whole universe created out of an egg. Thus, it is not unusual that in almost all ancient cultures eggs had been held as an emblem of life. The concept of all living beings born from an egg is also a foundational concept of modern biology."


The article continues, "Despite claims being made that Easter Eggs were originally pagan symbols, there is no solid evidence for this. It was not until the 18th Century that Jakob Grimm theorised a putative pagan connection to Easter Eggs with a goddess of his own whom he named Ostara, a suggested German version of Eostre."


It's a very interesting read and you can catch the whole thing on theholidayspot.com.


Once again, I wish you a blessed Easter Weekend and may the joy of redemption through the crucifixion of our Lord, Jesus Christ be with you.
Posted by Unknown at 4/23/2011 10:15:00 AM No comments: Links to this post