Plus One : For My Buddy Kev : Wisconsin 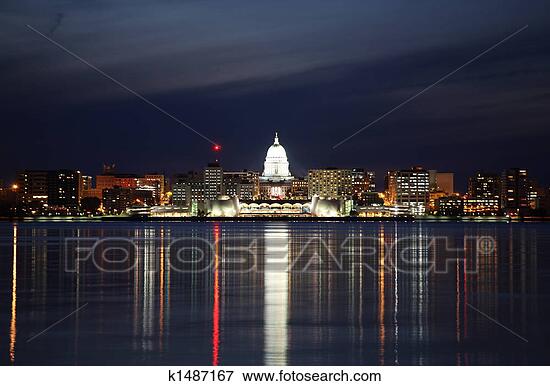 I'll take "State Symbols" for $1000, Alex. Clue: Beer and Brats. Answer in the form of a question : What is Wisconsin? (wild applause) I have been lucky enough to have been to over 30 states in the USA. Easily in the Top 5 is Wisconsin, home of the 12-Time NFL/Super Bowl Champs, the Green bay Packers. America's Dairyland is a beautiful place with a ton of history (as we know it) going back as far as 12,000 years. The first Europeans in Wisconsin were probably French explorers around 1634. Did I mention that Wisconsin is home to the 12-time NFL/Super Bowl champion Green Bay Packers? Earlier in the post I mentioned beer. Wisconsin has plenty of it. Just look at this list of breweries from all over the state. La Crosse is right on the Mississippi River and it is the proud home of the World's Largest Six Pack. That is NOT trick photography. I have seen it in person. Back when I was a light drinker (it got light and I started drinking), I was very pleased to find that in Wisconsin, EVERY little town seems to have more bars than people. Is this a great place or what? One of the cities I spent some time in was Prairie du Chien - which is French for "more bars than people". It's a cool town just across the Mighty Mississip from Iowa (the name of the town in Iowa escapes me) and the huge-ass pink elephant right on the side of the highway (drinking and driving past the huge-ass pink elephant is highly discouraged). Did I forget to tell you that Wisconsin is home to the 12-Time NFL/Super Bowl Champions?

Plan a trip to Wisconsin or find out about activities statewide here.


UPDATE : From Susan on Facebook: Toby nice bit on Wisconsin, except you forgot to mention that the AOPA is in Oshkosh and hosts an annual fly-in every July/August. It's really awesome, especally if you can "fly" in. Need a private pilot with a plane to do so. And another little tid bit, Johnsonville of the Johnsonville Brats have a super giant 18 wheeler grill truck. Saw it at Oshkosh. Also, Prairie du Chien actually translates to Meadow of the Dog. Sorry, French is a hobby of mine. "
Posted by Unknown at 7/07/2010 04:30:00 PM No comments: Links to this post (image corutesy of http://www.tripadvisor.com/)
Located on the Front Range of Colorado about 50 miles north of Denver is The Stampede City of Greeley. The city began as the Union Colony " which was founded in 1869 as an experimental utopian community "based on temperance, religion, agriculture, education and family values."[8] by Nathan C. Meeker, a newspaper reporter from New York City." (Wikipedia). Meeker later changed the name from Union Colony in honor of a newspaper editor who was once his boss - Horace Greeley (yes, that Horace Greeley). Today Greeley is a bustling University town of nearly 100,000 people. It's home to the University of Northern Colorado Bears, which boasts an alumnus you may have heard of - James A. Michener. It was at UNC, when Michener was a Social Science educator, that he came up with the idea for his famous novel, Centennial. Although Greeley's climate is basically desert, there is plenty of water around. The city sits near the confluence of the Poudre (pronounced "pooder") and South Platte Rivers. This "moderate" climate lends itself to year-round activities in the Stampede City. Greeley is a neat place to visit with accomodations for every budget, and is just an 80 mile drive to Rocky Mountain National Park. To quote the city's famous namesake, "Go west, young man".
Posted by Unknown at 7/07/2010 03:19:00 PM No comments: Links to this post

Houlton is located in far northeast Maine at the terminus of  Interstate 95 on the western border of New Brunswick. As you sit there reading this post, you are probably asking yourself, "What's going on right now in Houlton, Maine?". As a public service (and just because that's the way I roll), I present to you a live webcam of what's happening as we speak in downtown Houlton. You can thank me in the comments. :)
Houlton, population about 6500, was first settled by Aaron Putnam and Joseph Houlton in 1807, when Maine was still part of Massachusetts. The city holds the distinction of being involved in two pretty cool "firsts". From Wikipedia : "Houlton was the location of the first transatlantic Radio Intelligence Station installed by the U.S. Army MI-8 Radio Intelligence Service in World War I. The Houlton Radio Intelligence Station intercepted German diplomatic communications primarily from its Nauen high power radio station. The Radio Intelligence Service (R.I.S.) was created during World War I by MI-8 using selected Signal Corps personnel for the sole purpose of supporting strategic intelligence through radio intercept. Houlton was the first unit of its type built by the US intelligence services, and its success helped to lay the foundation for many more US long range radio intercept stations." On January 7, 1927, AT&T intiated the first TransAtlantic service with the AT&T Transoceanic Receiver Station located on the west side of Houlton. If you'd like more info on Houlton and some of the stuff going on the area just click here. Looks like I've got another spot to add to the Shoemaker Family Summer Tour '10 agenda - Houlton, Maine.
Posted by Unknown at 7/07/2010 02:38:00 PM No comments: Links to this post

I remember a summer about 45 years ago when Dad packed Mom, me and my two sisters in the car, probably a '63 Chevy Impala SS with a 300 horse 327, but I digress, and we went on a Sunday drive. We did a lot of Sunday drives when I was a kid - maybe that's where I get the urge to explore my surroundings to this day. On this particular Sabbath, we traveled west from Fort Worth and a while later ended up in Tin Top, Texas. Why I remember this day trip amongst the hundreds we took back then so many years later is a puzzle to me. As you might imagine, Tin Top ain't a happenin' place. Maybe it was the odd name that got my attention. Possibly it was the near-by Brazos River that caught my eye. At any rate, I remember being there like it was yesterday. Tin Top, Texas. I like the sound of that. I must say, however, that Tin Top has flourished in some ways. It now boasts guided catfishing trips.  With a population hovering around 25, Tin Top is not likely to become a tourist mecca, but the area does provide a place to "hide out".  Located about 45 miles west of Fort Worth in Parker County (near Weatherford), Tin Top is within easy reach of all my friends in the Metroplex. Take your kid or grandkid to Tin Top. Maybe 45 years from now, he'll have a sudden memory of a long ago Sunday drive and, like me, reflect on just why in the name of all that is holy, he recalls this place. And remember his Dad or Grandpa. Good times.
Posted by Unknown at 7/07/2010 10:08:00 AM No comments: Links to this post