Telluride, Colorado is located in the Four Corners area (where Colorado, Utah, Arizona & New Mexico meet) in San Miguel County in the San Juan Mountains. Considering its location and 8750 ft altitude, it comes as no surprise that for much of its history, Telluride was a mining town. Gold was discovered there in 1858. Oddly enough, the ski industry didn't come to Telluride until 1972 when Joseph Zoline installed the first ski lift for the Telluride Ski Resort. The scenery around the area is stunningly beautiful. Witness Bridal Veil Falls. It just so happens that this is weekend for the 37th Telluride Bluegrass Festival as well. I don't mine for gold or ski,  and bluegrass ain't my gig, but I damn sure fish, and the Telluride area offers some pretty dang good fishin'. All in all, Telluride seems like a great place to be this or any other weekend.
Posted by Unknown at 6/19/2010 11:59:00 AM No comments: Links to this post 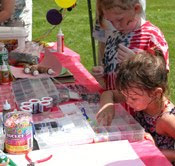 If anyone ever said that Mainers don't know how to put on a heavy duty weekend party, they have obviously never attended Harry's Hoedown in the town of Starks. Nor have they even thought about the Whatever Family Festival in Gardiner. But wait there's more ! A whole lot more ! Seriously now. These local get-togethers are a blast and, as you can imagine, not all that different from any other small-town celebrations throughout the country. The reason for celebration might not be the same, but the spirit and camaraderie of the attendees is no less festive than any other gatherings of the kind. the Whatever Festival is the closest one to us, as Gardiner is a "suburb" of Augusta. So all you Mainers pack up the youguns and head on out to Starks,  Old Town, Deer Isle or Whatever. It's a great New England Weekend to celebrate!
Posted by Unknown at 6/19/2010 10:52:00 AM No comments: Links to this post

Email ThisBlogThis!Share to TwitterShare to FacebookShare to Pinterest
Labels: Augusta, Maine, Minutiae, Whatever

Juneteenth, ( a combination of the words "June" and "nineteenth"...go figger) is a day that celebrates the announcement of the abolition of slavery in Texas. On June 19, 1865, Union General Gordon Granger read "General Order, No.3" at the Ashton Villa in Galveston stating that slavery was now illegal and slaves were to be treated as freedmen. That's something that I did not know. Juneteenth began in Texas. I used to know many black folks (I REFUSE to use "- American"...either you are American or you ain't) who had large family gatherings on Juneteenth to celebrate the emancipation of their ancestors. Please note that when many of us were kids in the '60s, historically speaking, 1865 was not that long ago to many black people. Older black people at that time had heard stories from their grand parents about the Civil War, slavery and such, so Juneteenth was a big deal to them. Rightfully so. Today I'd love to be at Grandma Brown's place outside Tyler, having a huge feast with my buddy Ira Isaih Brown, Jr, his sons and the rest of the Brown Family celebrating Juneteeth and being grateful for the end of that most inhumane of institutions. Hey, Ira ! Eat, drink, puff puff and pass it to the left, then eat some more! And please tell Grandma "the white kid" said hello.