Tomorrow Is a Very Special Day - Here's a Preview

I wanted to post this announcement tonight so you'd be aware of what is going to be our feature tomorrow on Three States Plus One, because tomorrow is a special day for all Texans. It was on December 29, 1845 that The Republic of Texas became the State of Texas, entering the United States as the 28th State in the Union.

I am thinking about doing several small posts, each of which would cover a specific period in Texas History, from the 16th Century to the present. That's a lot of territory to cover, but I think it will be well worth the effort when all is said and done. I promise to make each post as concise and informative as possible. This type of format will also allow you to read each entry as your time constraints dictate, without getting about half way through a single long post and being interrupted by something pesky...like work.

It promises to be a lot of fun taking a look at the events and people that shaped the land that is like no other place on Earth. It's your home. It's my home. And it's like a whole other country. It is Texas.
Posted by Unknown at 12/28/2010 07:09:00 PM No comments: Links to this post

The Blizzard of 2010: The Aftermath

When I went outside a few minutes ago, I saw something very strange. There was this big, yellow ball in the sky. I came back in and fired up my laptop and put my Google Fu to good work. After doing some exhausted research, I learned what this strange orb was. According to Wikipedia, this object is called the Sun. It's been what seems like forever since we've seen in it, I needed documentary evidence to prove what this object was. I am relieved to know that what I suspected it to be was indeed true.

While outside, I snapped a couple of more photos that show the aftermath of the Blizzard of 2010. I was able to walk around the parking lot in our section of the complex and got some close ups of the reminders of what we experienced over the course of Sunday night and all day yesterday. 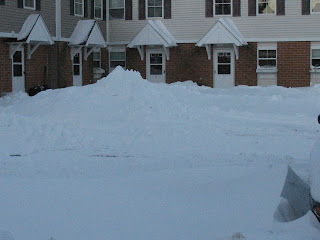 The first photo shows where some of the snow was plowed off the parking lot into the courtyard. the peak of this pile is about six feet tall. 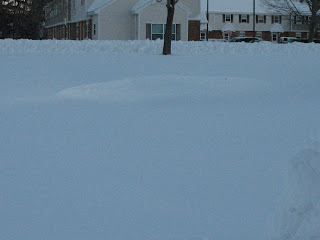 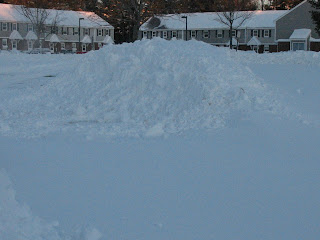 The big pile in the next photo is some of the snow removed from part of the parking lot in front of our apartment. This pile of snow is at least seven feet tall!

I haven't even looked out the back door yet, so I may have more photos to post later today. My best guess of how much snow we got is between two and a half to three feet! It's difficult to tell because it was so windy that the snow didn't exactly settle like it would on a less windy day. In case you missed the live blogging I did yesterday as the blizzard hit us with all its fury, you can look it over right here.

It was quite an experience, as one weather guy put it, to witness tropical storm strength winds with snow falling at 2 or 3 inches per hour. It's still December for a few more days and winter is just getting started here in New England, and I'm confident that we'll get another big blast before it's all said and done. Damn, I miss Texas.  :)
Posted by Unknown at 12/28/2010 08:21:00 AM No comments: Links to this post