Colorado Chronicles : The Ancient Ones 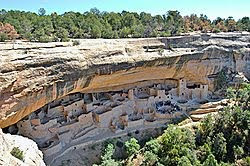 Some of the most stunning vistas in the world are in Colorado - Pike's Peak, Rocky Mountain National Park, Mesa Verde National Park....wait! Did I say Mesa Verde? Why, yes I did. Those stunning vistas I mentioned a few words back are truly astounding...villages built into the sides of sheer cliffs, indicating, for the times, an advanced civilization. Rock engravings, or petroglyphs,  and pictographs (rock drawings) on the stone walls of the village give us insights regarding the daily lives of these early Americans such as how they saw the world around them and what they hunted for food.

The story of the Ancient Ones is believed to have begun around 1200 B.C. They flourished for many years, then all of the sudden (or so it seems), disappeared. How and why the Anasazi suddenly vanished is a mystery still in need of a solution today. Although the Spanish explored the area in and around Mesa Verde (Spanish for "green table") in the 1700's, it appears that the first outsiders to see the cliff dwellings did so in the last half of the 19th Century. These magnificent structures were regularly vandalized, therefore in order to help protect them from such destruction, President Teddy Roosevelt declared Mesa Verde to become a National Park in 1906.

What an incredible, if not spiritual, place Mesa Verde is and it stands as a Monument to the ingenuity and engineering skills of The Ancient Ones.
Posted by Unknown at 6/26/2010 02:07:00 PM No comments: Links to this post

It's the time of year again when Americans gather to celebrate our Nation's independence with cookouts, parades, the flying of Old Glory and the freedoms that are unique to America and Americans. I will be attending the largest 4th of July Festival in the state again this year. It takes place in one of Maine's smallest cities, Eastport. The wife, kids and I will be visiting my in-laws and spending many hours in downtown Eastport eating fried dough, greasy-ass pizza and Rose's Hot Dogs! It's always a hoot and I expect this year to be no different.
The whole state will be lit up with fireworks and other festivities during the holiday weekend. From Bath to Bangor and Ogunquit to Old Orchard Beach,The Pine Tree State is loaded with Patriotic Americans of all shapes, sizes and colors. Maine holds the prestige of having more military personnel (currently serving/have served) per capita than any other state in the Union. Something to truly be proud of. Here's  a big list of 4th of July stuff going on all over Maine. If you Mainers have no plans or just haven't decided what to do on the 4th, I'm certain something on the list will be right up your alley.
Posted by Unknown at 6/26/2010 11:44:00 AM No comments: Links to this post

Texas Tidbits : Waco and Its Mammoths


Waco, a city of 121,000 fine folks, is located on the Brazos River about 100 miles south of Fort Worth on I-35. It's home to the oldest institution of higher learning in the State of Texas - Baylor University. Waco is also the home to one of the country's most popular soft drinks. Dr Pepper was invented by Charles Alderton at Morrison's Old Corner Drug Store in Waco in the 1880's. Another soft drink, Big Red, also calls Waco home.  Sadly, Waco is probably best-remembered by many young people as the location of the Branch Davidian tragedy in the 1990's.

I was somewhat surprised as I was looking for info on Waco this morning when I came across this story about a mammoth discovery on the Bosque River. I was already familiar with the dinosaur tracks near Glen Rose, but this was new to me. As someone who finds things like the discovery of the 10,000 year old remains of a 40,000 pound behemoth interesting, this finding has given me a real good reason to visit the Waco area again. If you'd like to see much more of the Colombian Mammoths of Waco, contact The Waco Mammoth Site so you can plan your trip back in time to prehistoric Texas. Get your FREE Texas Travel Guide at traveltex.com