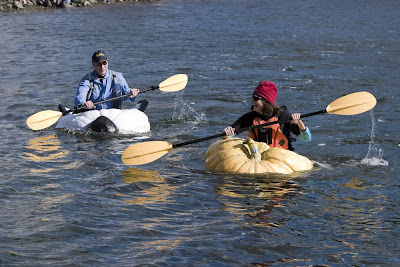 The state of Maine has a long (and I mean a long) history with boats and boating. Bath, Maine is called The City of Ships for cryin' out loud. One reason why this is so is Bath Iron Works. BIW built 83 destroyers for the US Navy...and that was just in World War II! You take that kind of boat building skill and a giant pumpkin and what do you get? The Damariscotta Pumpkinfest and Regatta! I'm sure you get the "pumpkinfest" part of that, but "regatta"? First to the "pumpkin" part. I got this from the event's website with the results of the 2009 Damariscotta Pumpkinfest and Regatta :

"Highlights of last year’s festival included a big parade complete with Maine’s new record pumpkin (weighing 1,210 pounds!) and its grower Elroy Morgan and Togus the Cat.  The Pumpkin Dessert Contest had 18 fine entries – all available for tasting.  There were tons of children’s games and a free matinée.  24 giant pumpkins were carved, painted, or both, by artists of all ages.  Pumpkins of various sizes were thrown, hurled, shot, and dropped thanks to record-holding punkin chunkers and catapulters, and a 150-foot crane taking aim on a retired police cruiser!" Imagine the fun! I mean, you've got kids' games, a parade, punkin chunkin' and pumpkin desserts. All of those activities are well and good, but it's the "regatta" part of the festival's name that piqued my curiosity. I immediately thought of sail boats, lobster boats and whatnot, but, boy, was I wrong. The "regatta" is for pumpkin boats! Look closely at the embedded photo. Those two people are pump-kayaking! There will also be motorized pumpkin boats! I have mentioned before that Mainers are a hardy and creative bunch, but this makes everything else innovative and creative about Maine seem like child's play. You gotta love something like this. Just think...if Gilligan and the other castaways had only discovered pumpkins on that desert isle, TV history would turned out much differently. And we'd have Damariscotta, Maine to thank for it.
Posted by Unknown at 9/15/2010 03:56:00 PM No comments:

We welcome another Humpday with Texas news that you probably haven't heard about. Why haven't you heard about it? Because our Lame Stream Media is too busy kissing President Obama's ass to report on real news. By real news I mean Dumbass News. Now that I think about it, Dumbass News and reporting on the current occupant of the White House are one and the same. But, I digress. Since I have a nose like a blood hound for Dumbass News, and I have done some dumbass stuff that would make Dumbass News blush (again I digress), I feel compelled to share it with you, fellow citizen. It's gonna be very difficult to "out dumbass" the 52% of voters who cast their ballots for our Disaster in Chief  (more digression), but I shall give it the old college try. Please remember 52% ers, that I say that with love in my heart. So awaaaaaaayyyyyyyyy we go!
There is plenty more Dumbass News to report on but I don't think it's a good idea to overdose you on dumbass today. I will, however, give you a hint of more dumbassery to come : there's a shop in Santa Cruz, California that is selling ice cream, not with chocolate chips or nuts or sprinkles, but with marijuana mixed in ...wait...for...it...for medical purposes! This is a brilliant marketing ploy! A guy walks in the shop and orders a pot-sicle, pays and returns in about an hour and guess what? The dude has the munchies! He then proceeds to order the 31 other flavors for dessert! Boom! The Ice Cream Guy will be wealthy beyond his wildest dreams! Until the gubmint shuts him down. Or until W.C. the monkey tries one or two of the banana cream pot-sicles. At that point the Ice Cream Guy had better find a garage to hide in. But, I digress.