100 miles from where I sit is Bar Harbor, Maine. Located on Mount Desert Island, Bah Hahbuh (a little Maine accent there) was originally occupied by the Wabanaki Indians. In the early 1600's, French explorer Samuel De Champlain ran aground on a rock ledge and promptly named the place Isles des Monts Deserts, meaning island of barren mountains. The island is the largest in Maine at a bit over 70 square miles. Add this to the Shoemaker Family Tour '10 as a summer destination.
Posted by Unknown at 6/21/2010 06:39:00 PM No comments: Links to this post

In the right Sidebar, under "Stuff I Read", you'll see two new additions - Nuke Gingrich and Urban Grounds. If you enjoy reading about current events and some pithy commentary, check these guys out. And while you're there, click on one of the ads. It helps my buddy, a fellow Texan, No2Liberals pay the bills. Thanks  !
Posted by Unknown at 6/21/2010 05:23:00 PM 1 comment: Links to this post

Hero:remarkably brave person: somebody who commits an act of remarkable bravery or who has shown an admirable quality such as  great courage or strength of character . See: Audie Murphy. 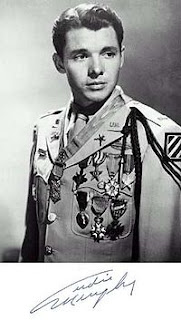 Audie Leon Murphy was born in Kingston, Texas, June 20, 1925. Many of you will recognize him as an actor. Murphy starred in over 30 movies, including "To Hell and Back". Murphy was, however, was much more than an actor. He was the most decorated soldier of World War II. In short, a true American hero. Click on this link and if you read nothing else, look on the right side of the page to see the honors that this man received in service to his country. Simply amazing. As a Texan, I am honored to call this man my Brother.
Posted by Unknown at 6/21/2010 04:57:00 PM No comments: Links to this post