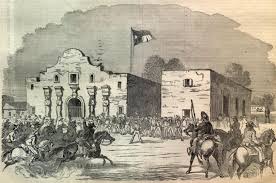 It 175 years ago today that, after thirteen days, the Alamo and all its combatants fell to the Mexican Army of General Santa Anna. Outnumbered by more than 10 to 1, the defenders of the Alamo were no match for the better-equipped Mexicans. The siege of the Alamo was over.

For the definitive last word on this subject, we go to The Handbook of Texas Online. "On March 5, day twelve of the siege, Santa Anna announced an assault for the following day. This sudden declaration stunned his officers. The enemy's walls were crumbling. No Texan relief column had appeared. When the provisions ran out, surrender would remain the rebels' only option. There was simply no valid military justification for the costly attack on a stronghold bristling with cannons. But ignoring these reasonable objections, Santa Anna stubbornly insisted on storming the Alamo. Around 5:00 A.M. on Sunday, March 6, he hurled his columns at the battered walls from four directions. Texan gunners stood by their artillery. As about 1,800 assault troops advanced into range, canister ripped through their ranks. Staggered by the concentrated cannon and rifle fire, the Mexican soldiers halted, reformed, and drove forward. Soon they were past the defensive perimeter. Travis, among the first to die, fell on the north bastion. Abandoning the walls, defenders withdrew to the dim rooms of the Long Barracks. There some of the bloodiest hand-to-hand fighting occurred. Bowie, too ravaged by illness to rise from his bed, found no pity. The chapel fell last. By dawn the Centralists had carried the works. The assault had lasted no more than ninety minutes. As many as seven defenders survived the battle, but Santa Anna ordered their summary execution." More details on the conclusion of this extraordinary story can be found at the Texas State Historical Association website.

The bottom line is that the Alamo was lost to the Mexican Army, but the bravery of her defenders bought time for the fledgling Nation to officially declare its independence from its oppressors in Mexico, write a Constitution and put together an Army that was capable of defending Texas, her people and their Liberty. With the Alamo lost, a rallying cry for Texian troops was born. Remember the Alamo! And less than two months later at San Jacinto, a new Nation would emerge from the nearby bayous...the Republic of Texas was born.