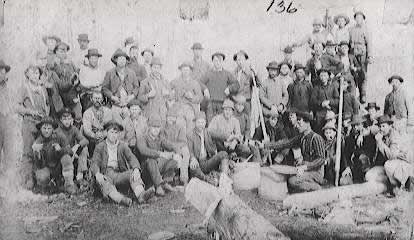 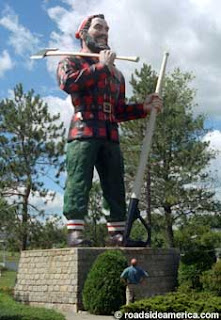 Lumberjacks have been a part of Maine history since the 1600's, when English explorers began harvesting the trees on Monhegan Island. The first sawmill in Maine was a water-powered job built in Berwick in 1634. Four hundred years later, the loggers of today, formerly known as lumberjacks ( I like "lumberjacks" better), continue this tradition, with some loggers even getting their own TV Shows. The most famous of these TV Lumberjacks are the American Loggers, the seven Pelletier brothers and four of their sons. The show is filmed in Northeastern Maine. I wonder what the men of the 1600's would think about such a thing? I am sure that as you flipped through channels on your cable or satellite system, you've happened upon some of the logging games programs on one of the ESPN channels. Timber Tina's Great Lumberjack Show
has been featured on ESPN, The Discovery Channel and ABC Sports plus several other networks.
The most famous lumberjack of all is Paul Bunyan. The statue of Bunyan on the right is in Bangor, one of the many cities to claim the mythological Ax Man as a Native Son.
The next time you sit on a park bench, see a baseball bat or use a toothpick (remember 90% of them come from Maine), you can thank the men from the 1600's, the Pelletier brothers and Paul Bunyan for it.

VisitMaine.com is the place to order your FREE Maine Travel Guide.